I would like to share the interview that the journalist Joan Teixidó i Pau wrote about my work, inside the innovation magazine of the newspaper el Segre, VEINTIDOS because it has been one of the favorites of my family and friends, saying that they finally understand what I do! So thank you very much Joan for making it clear to everyone what is the work of innovation and innovation ecosystems from all levels at the same time.

Jara Pascual. With roots in Zaidín, she has created a company in Amsterdam and is currently leading a debate group in the European Parliament on the gender gap in ‘start-up’ investments.

You have specialized in innovation and the world of investors in business projects. How are we?

The money from the mutual funds goes to very few projects led by women. There are many reasons, but one is that there are no female investors, and since there are not, one of the factors that most influences is if the founder likes, more than the type of project, the meritocracy and wanting to be with someone who is similar to you, that you like me. Leadership skills are not looked at to make a change in the marketplace, or if they have the ability to scale a company. As they are not done well, on real data, that causes a very low return on investment. No, there are no female investors. There are no female business angels.

A European study long ago resolved that one of the factors is that women do not reach senior management positions, so they have less money to invest. They also have, in general, less purchasing power, and what they have they tend to invest in less amounts, which affects the impact of the investments. It is a fish that bites the tail.

Is the investment world a men’s club?

Yes, and women are not comfortable. When a woman has a very feminine idea, men do not understand it or do not see the performance. Regarding the leadership full of men, what scenario would you like more in the near future, one of equality or one that reverses the situation?

I think there should be a balance, because if there is diversity and we accept differences, we have a much healthier way of working. There cannot be only one point of view, because we will always have the same results. When companies have to innovate, there has to be diversity in every way. The world would have to swing.

You have founded a company that links ‘start-ups’ with companies, investors and the University, but you are an engineer.

In Barcelona I studied telecommunications engineering. I have always liked to invent, and from my career I saw very early that a link was needed between the world of engineering and the corporate and business world. There I took a course in science, technology and society that opened my eyes, because it related all these worlds. The future is not only technology, but combining it with science and people. Years later I founded Collabwith.

And what is it, Collabwith?

It is a marketplace and also a virtual innovation ecosystem that connects start-ups (recently created companies) with firms, investors and universities. When I was working at Adidas in Munich, I realized that to innovate one always has to know what is happening in the world, in order to assess it and incorporate it into your project, but there is no platform that groups projects together. Here was born, now two and a half years ago, Collabwith.

Good feelings, in the entrepreneurial world?

Yes, it is a multidimensional personal growth that has allowed me to meet many entrepreneurs and many mistakes in this sector. Some believe that if after a few weeks putting an ad on Google they don’t make any sales, or after six months they see that they have no benefits, they let it be. There is a problem of conception of what it means to undertake. You have to know why you want to do it, and it is a path of personal growth. It is not a one-week or six-month thing, but a long-term life project.

We return to investments. You are a member of the council, in the European Parliament, of Knowledge 4 Innovation (K4I).

With Collabwith I saw that a platform like ours could help, but it would not be the catalyst for change. That is why I went to the European Parliament. I knocked on the door, in the innovation forum, with which we have the same vision, and they invited me. What the Knowledge 4 Innovation forum does is influence that the innovation agenda is present on the agenda of the Parliament and the European Commission.

How do you do it?

We organize discussions. But it is not easy, since between the European Commission, which is the most administrative part, and the European Parliament, which is the political part, there is little dialogue. The forum brings together these two parties, together with companies and leaders from the world of the University, and we debate proposals, improvements and solutions that have to do with the world of innovation and entrepreneurship, always with experts from each of the topics to be debated . 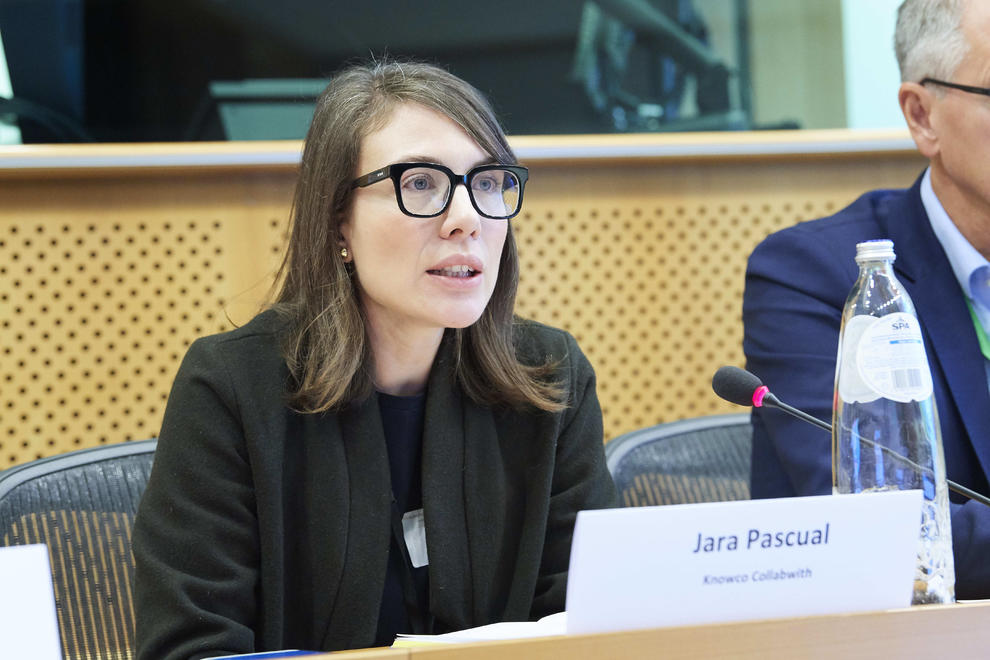 How is the result displayed?

Now in the European Parliament a new financial period has begun. That means the new budgets are being approved and distributed. We have a blank page, and now we can influence how Europe’s budgets are moved and distributed. With the discussions we give information to the two parties so that they can implement them to the budgets. Above all, we have two main points of action: that objectives be set to increase funding for women who lead research and companies in all programs and that specific programs be created to balance the gender gap.

Do you have data on this gender gap?

There is very little data, which comes from non-transparent platforms, from newspaper articles and is manually restored in India. They do not come from the movements of investors nor is artificial intelligence used to move and study this data. Has no sense. But we have gotten a commitment from Europe to have and study data. You come from a technological career.

A few months ago the director of the Higher Polytechnic School of the University of Lleida told us that they had problems filling the classrooms with women.

Notice that today we have very masculine technological toys, I am talking about colors and shapes, which are what promote the way of the future. Why are we communicating technology in such a masculine way? It would have to be as neutral as possible. In technology majors, more should be said about positive computing, emotional intelligence and how to create technology for the well-being of people and society.

Engineers as people who solve problems for society.

Exactly, more than a lonely man in front of a screen, it is about changing the perspective of technology, about taking technology out of our heads to create, if not looking at them from a social, philosophical and human point of view. And here the woman will enter very quickly.

You are the owner of a very old blog. Are you still a Spanish in Munich?

I still have the blog open, because it helps a lot of people who want to go live in Munich, although now I live in Amsterdam. Perhaps it was my first entrepreneurial adventure, and it has benefited me in my career. A book has emerged that explains how parents have emigrated as a family, a tool to help and educate parents through children.

You can read the interview directly in the Segre newspaper, here.

ABOUT COLLABWITH
Collabwith is a technology and a service to structure collaboration for innovation. It’s a tool to connect academics-startups-organizations. Because a tool is not enough to transform how you collaborate, here we have created a new methodology, personalized trainings, a new way of communication and a tailored made consulting for you to be more effective and efficient, now.